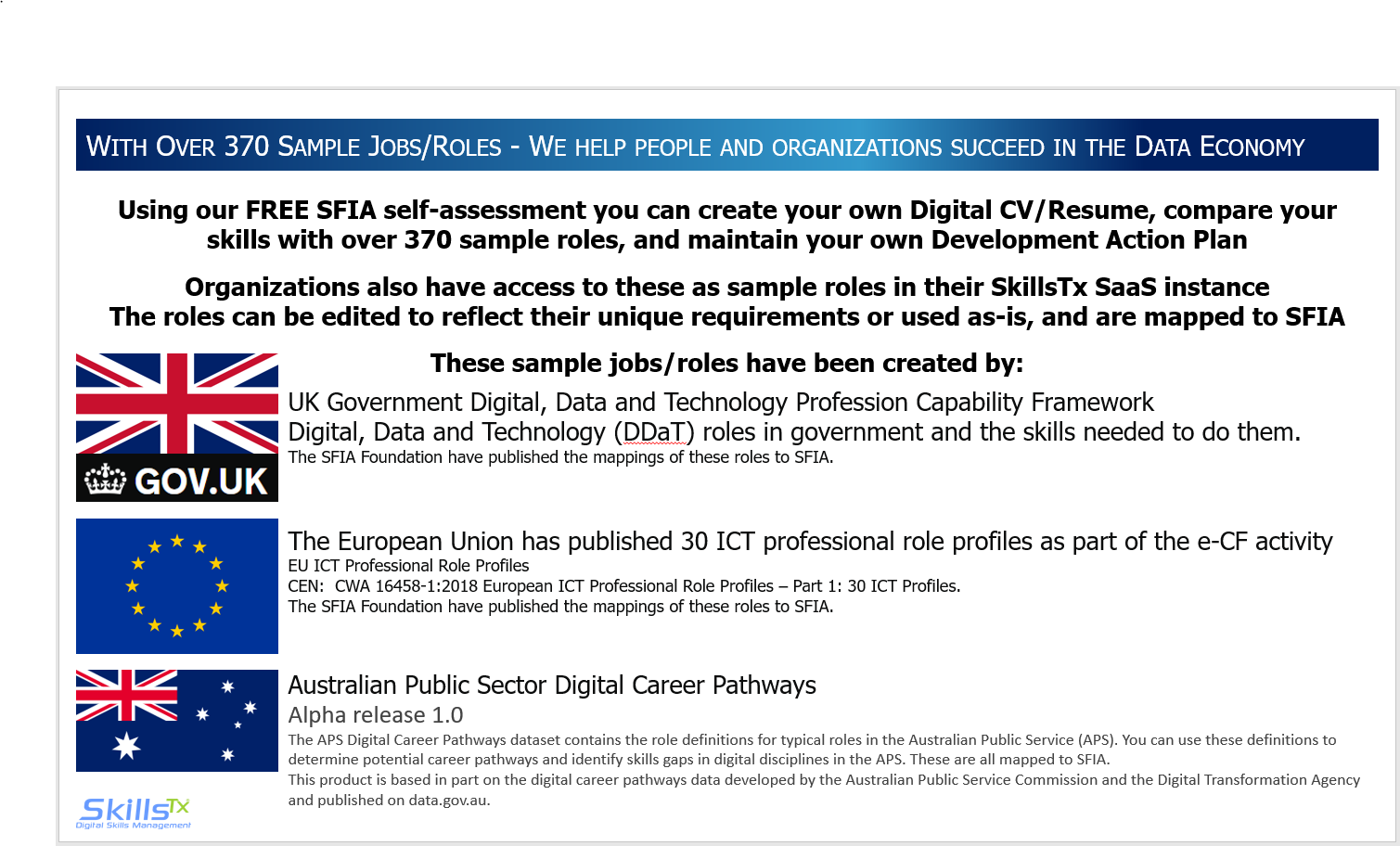 by Matthew Burrows
in Insights
Comments

Recently the SFIA Foundation has published a number of example SFIA-based role profiles to support those working with other frameworks. This include the UK Government DDaT (Digital, Data and Technology) Profession Capability Framework, the European Union (EU) ICT Professional Role Profiles, and the Australian Public Sector (APS) Digital Career Pathways.

The UK Government Digital Service has published some 137 Digital, Data and Technology (DDaT) roles in support of digital transformation along with illustrative ‘career paths’ and ’employment stories’.

The UK public sector has been a long-term user of the SFIA Framework and three of the largest departments, MoD, HMRC, and DWP have mapped the SFIA skills to DDaT roles using SFIA 6, which had specific updates to address digital transformation.

A number of SFIA users within the public sector have asked for further information about such mappings and in particular have expressed interest in seeing this work updated for SFIA 7. In particular they wish to see their public sector roles mapped to the most commonly used private sector skills framework. SFIA 7 was again updated to reflect current views on digital transformation.

The SFIA Foundation has undertaken this illustrative mapping inspired by the work of MoD, HMRC and DWP and specifically brought it up to date with SFIA 7.

A set of SFIA-based role profiles for each of the EU ICT roles which are produced by the European Union as part of their e-CF (European Competency Framework) project.

The take-up of e-CF is relatively modest compared with the global coverage of SFIA (nearly 200 countries around the world), so publishing a SFIA mapping makes these EU role profiles more widely accessible to organisations who prefer to use SFIA rather than e-CF, or use both frameworks together.

All roles available in SkillsTx

To make them even more accessible, we have included these roles within the SkillsTx SaaS solution, allowing individuals making use of our free self-assessment offer to compare their own skills profile against the requirements of any of the EU, DDaT or APS  roles, and the ability to create and maintain their own development action plan within our SaaS platform.

We have also added these roles to the set of sample roles/jobs included for our corporate users, allowing them to use these as they are or as a starting point that can be edited to suit their own company requirements. If your organization isn’t currently a SkillsTx SaaS customer, you can sign up for a free org trial and see these role profiles within your SkillsTx workspace.